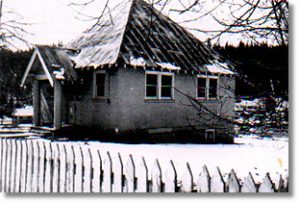 The Pierce Free Public Library is located in the historic mining and logging town of Pierce, Idaho. The library was instituted under the plan for “School District Libraries.” T.B. Reed, a state legislator from Clearwater county and a resident of the Pierce area, directed the necessary legal actions for its formation. On July 14, 1919 a petition was filed with the board of trustees of Independent School District no. 1 in Clearwater county asking that a Free Public Library and reading room be established in Pierce. The school district at its September 8th, 1919 meeting found that since there were more than the twenty signatures required by law, and since this issue had been voted on at the annual election (28 for the library, 10 against), that a resolution should be drawn up establishing the tax upon all taxable property in the school district to create and support a library.

The school board appointed the following trustees for the new library: Marie E. Roos, Sumner Rigdon, R.H. Bailey, Wallace McCloskey and T.B. Reed.The library was opened on September 20, 1921 at the Pierce School. Miss Laura J. Waters, a teacher, was the first librarian and received $30.00 per month for her services. Mrs. Queen A. Reed was a volunteer assistant. Arthur Dinnison did the cataloging of the books, which grew by June 30, 1922 from 540 books to 1022. The library was open 24 hours a week (after school and in the early evening six days a week). In 1922 land was purchased on Main Street, and by October 1923, a new library building had been constructed. The cost of the building was $4,645.97. The building finished in 1923 served as the library until 1970 when a new addition and major improvements to the old building were made. 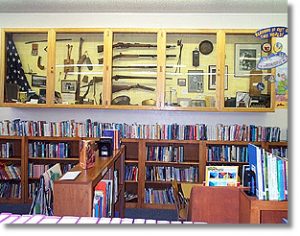 Many local residents have supported the library during the past seventy-eight years as patrons, staff members and trustees. One of these that stands out is Louise Dinnison who became a board member soon after the original library building was finished and served as board president for thirty-three years. Her unfailing determination to keep the library functioning under sometimes adverse conditions was a great service.

On the outside, today’s library building is much the same as it was when remodeled in 1970, but librarians and board members have worked hard to update library materials and provide patrons with services found in libraries serving much larger cities. Our book collection and periodical subscription list are almost double what they were in 1970. Thanks to grants from the state and federal government, we have improved our collection, provide Internet access for our patrons, and are linked to the VALNet system’s regional online public access catalog of over 600,000 items.