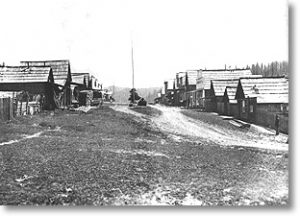 Yellow gold. Green gold. Both items are historically important to Pierce, Idaho. A party of gold seekers, led by Captain E. D. Pierce and a halfdozen others, was led by Jane, the daughter of Chief Timothy, through nearby mountains to Canal creek in 1860. One of the party, Wilbur Barrett is credited with discovering the golden grains in the creek bed. The resulting rush, estimated at as many as 6,000 men, among them many Chinese, was reduced years later by another strike elsewhere. Today only a few individuals dip their gold pans. The last gold dredge worked in the Quartz Creek area near the local Jaype plywood plant just as World War II began.

A father and son, C.D. and Nat Brown, came West in the 1890’s seeking new areas of timber and found the “green gold” they sought in the largest stand of white pine and other coniferous types in north Idaho’s Clearwater and Benewah counties and nearby hills. Word spread to their former workers in the timber depleted Great Lakes region, and many came out to establish homesteads which opened the land for lumbermen. In 1925 a railroad was built to facilitate hauling the harvest to mills, large and small, nearby.

The green gold actually created the small town of Pierce. Today the town is still small, but there are new commercial establishments, an elementary-middle school, a community activity center with swimming pool, and a new logging museum. Summer and winter recreational activities include fishing, hunting, downhill and cross country skiing, hiking, trail biking, 4-H groups, girlscouts, and adult social and civic groups. Commercial packing, summer and winter, is available for tours and hunting of deer, elk, bear and turkey. In addition, there is an efficient and professional medical clinic, and EMT workers provide emergency treatment and prompt means of transportation to nearby hospitals for more serious cases.

The town elevation is about 3000 feet, but temperatures are generally considered moderate.